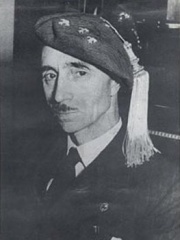 Xavier, Duke of Parma and Piacenza, known in France before 1974 as Prince Xavier de Bourbon-Parme, known in Spain as Francisco Javier de Borbón-Parma y de Braganza or simply as Don Javier (25 May 1889 – 7 May 1977), was the head of the ducal House of Bourbon-Parma and Carlist pretender to the throne of Spain. He was the second son of the last reigning Duke of Parma Robert I and his second wife Infanta Maria Antonia of Portugal, although born after his father lost the throne. Educated with austerity at Stella Matutina, he grew up in France, Italy and Austria, where his father had properties. Read more on Wikipedia

Page views of Prince Xavier of Bourbon-Parmas by language

Among noblemen, Prince Xavier of Bourbon-Parma ranks 265 out of 843. Before him are Princess Antoinette, Baroness of Massy, Duchess Sophia Frederica of Mecklenburg-Schwerin, Luisa of Naples and Sicily, Saint Margaret of Scotland, Madeleine of Valois, and Archduchess Elisabeth Franziska of Austria. After him are George, Duke of Saxony, Frederick II Eugene, Duke of Württemberg, Afonso, Prince of Portugal, César, Duke of Vendôme, Princess Sophie of Saxony, and Theobald III, Count of Champagne.