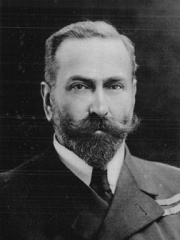 Admiral of the Fleet Louis Alexander Mountbatten, 1st Marquess of Milford Haven, (24 May 1854 – 11 September 1921), formerly Prince Louis Alexander of Battenberg, was a British naval officer and German prince related to the British royal family. Although born in Austria, and brought up in Italy and Germany, he enrolled in the United Kingdom's Royal Navy at the age of fourteen. Queen Victoria and her son the Prince of Wales (later Edward VII) occasionally intervened in his career: the Queen thought that there was "a belief that the Admiralty are afraid of promoting Officers who are Princes on account of the radical attacks of low papers and scurrilous ones".However, Louis welcomed assignments that provided opportunities for him to acquire the skills of war and to demonstrate to his superiors that he was serious about his naval career. Read more on Wikipedia

Page views of Prince Louis of Battenbergs by language

Among politicians, Prince Louis of Battenberg ranks 4,720 out of 15,710. Before him are Gung Ye, John Parricida, Yaqub Beg, Frederick I, Margrave of Meissen, Wonjong of Goryeo, and Aaron Burr. After him are Princess Christine Louise of Oettingen-Oettingen, Vaišvilkas, Jarmila Kratochvílová, Carausius, John Hawkwood, and Leonnatus.