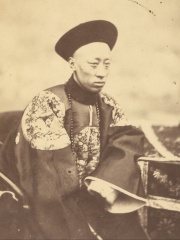 Yixin (11 January 1833 – 29 May 1898), better known in English as Prince Kung or Gong, was an imperial prince of the Aisin Gioro clan and an important statesman of the Manchu-led Qing dynasty in China. He was a regent of the empire from 1861 to 1865 and wielded great influence at other times as well. At a young age, Yixin was already noted for his brilliance and was once considered by his father the Daoguang Emperor as a potential heir. Read more on Wikipedia

Among politicians, Prince Gong ranks 5,736 out of 15,710. Before him are Bocchus I, Theudigisel, Injong of Goryeo, Christian August of Holstein-Gottorp, Prince of Eutin, Otto I, Duke of Swabia and Bavaria, and Prince Edward, Duke of Kent. After him are Pippo Spano, Uday Hussein, Ivan Alexander of Bulgaria, Tetsu Katayama, Louis I, Prince of Monaco, and András Hadik.