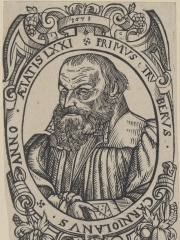 Primož Trubar or Primus Truber (pronunciation ) (1508 – 28 June 1586) was a Slovene Protestant Reformer of the Lutheran tradition, mostly known as the author of the first Slovene language printed book, the founder and the first superintendent of the Protestant Church of the Duchy of Carniola, and for consolidating the Slovenian language. Trubar introduced The Reformation in Slovenia, leading the Austrian Habsburgs to wage the Counter-Reformation, which a small Protestant community survived. Read more on Wikipedia

Among religious figures, Primož Trubar ranks 922 out of 2,272. Before him are Peter of Saint Joseph de Betancur, Paolo Giovio, Sebastian Castellio, Abu Hudhayfa ibn Utba, Teobaldo Boccapecci, and Eutyches. After him are Simeon Stylites the Younger, Methodios I of Constantinople, Antipope John VIII, Alessandro Valignano, William Booth, and Walter Kasper.

Among RELIGIOUS FIGURES In Slovenia