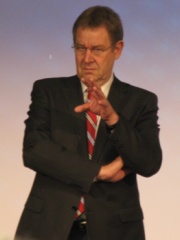 Poul Oluf Nyrup Rasmussen (Danish pronunciation: [ˈpʰʌwl ˈnyˀɔp ˈʁɑsmusn̩], informally Poul Nyrup, born 15 June 1943), is a retired Danish politician. Rasmussen was Prime Minister of Denmark from 25 January 1993 to 27 November 2001 and President of the Party of European Socialists (PES) from 2004 to 2011. He was the leader of the governing Social Democrats from 1992 to 2002. Read more on Wikipedia

Among politicians, Poul Nyrup Rasmussen ranks 7,481 out of 15,710. Before him are Bertrand Barère, Jean-Frédéric Phélypeaux, Count of Maurepas, Mutimir of Serbia, Prusias II of Bithynia, Merneferre Ay, and Abdullah of Pahang. After him are Ieng Thirith, Kâzım Karabekir, Publius Decius Mus, Tefnakht, Edward the Exile, and Zu Yi.