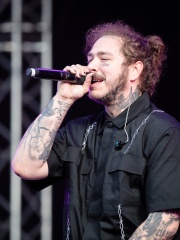 Austin Richard Post (born July 4, 1995), known professionally as Post Malone, is an American singer-songwriter, rapper and record producer. Known for his introspective songwriting and laconic vocal style, Malone has gained acclaim for bending a range of genres including country, grunge, hip hop and R&B. He first attained recognition in 2015 following the release of his debut single "White Iverson". He subsequently signed a recording contract with Republic Records.Malone's debut album Stoney (2016) was a commercial success and featured the hit single "Congratulations". Read more on Wikipedia

Since 2007, the English Wikipedia page of Post Malone has received more than 28,269,365 page views. His biography is available in 39 different languages on Wikipedia making him the 1,706th most popular musician.