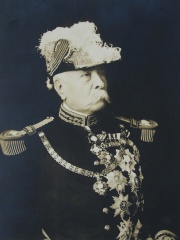 José de la Cruz Porfirio Díaz Mori ( or ; Spanish: [poɾˈfiɾjo ði.as]; 15 September 1830 – 2 July 1915) was a Mexican general and politician who served seven terms as President of Mexico, a total of 31 years, from 17 February 1877 to 1 December 1880 and from 1 December 1884 to 25 May 1911. The entire period from 1876 to 1911 is often referred to as the Porfiriato.A veteran of the War of the Reform (1858–1860) and the French intervention in Mexico (1862–1867), Díaz rose to the rank of General, leading republican troops against the French-imposed rule of Emperor Maximilian. He subsequently revolted against presidents Benito Juárez and Sebastián Lerdo de Tejada, on the principle of no re-election to the presidency. Read more on Wikipedia

Porfirio Díaz is most famous for being the President of Mexico for over thirty years.

Among politicians, Porfirio Díaz ranks 1,565 out of 15,710. Before him are Lin Biao, Yun Posun, Huni, Princess Isabella of Parma, Marie Walewska, and Chester A. Arthur. After him are Mahfiruz Hatun, Bill de Blasio, Olof Skötkonung, Uesugi Kenshin, Albert Lebrun, and Amr ibn Hishām.