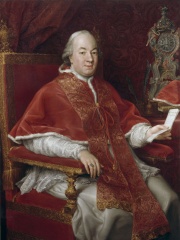 Pope Pius VI (born Count Giovanni Angelo Braschi, 25 December 1717 – 29 August 1799) was head of the Roman Catholic Church and ruler of the Papal States from 15 February 1775 to his death in 1799.Pius VI condemned the French Revolution and the suppression of the Gallican Church that resulted from it. French troops commanded by Napoleon Bonaparte defeated the papal troops and occupied the Papal States in 1796. In 1798, upon his refusal to renounce his temporal power, Pius was taken prisoner and transported to France. Read more on Wikipedia

Pope Pius VI was most famous for being the pope who was imprisoned by Napoleon and died in captivity.

Among religious figures, Pope Pius VI ranks 117 out of 2,272. Before him are Pope Pius V, Clare of Assisi, Pope Sylvester I, Albertus Magnus, Francis Xavier, and Catherine of Siena. After him are Job, Pope Pius VIII, Saint Christopher, Agatha of Sicily, Hassan-i Sabbah, and Pope John XXII.