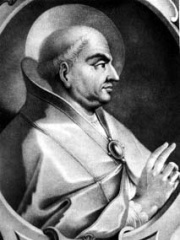 Pope Martin I (Latin: Martinus I; between 590 and 600 – 16 September 655), also known as Martin the Confessor, was the bishop of Rome from 21 July 649 to his death 16 September 655. He served as Pope Theodore I's ambassador to Constantinople and was elected to succeed him as pope. He was the only pope during the Eastern Roman domination of the papacy whose election was not approved by an imperial mandate from Constantinople. Read more on Wikipedia

Pope Martin I was most famous for being the first pope to be martyred. He was killed in the year 867 by supporters of the Emperor Louis II.

Page views of Pope Martin IS by language

Among religious figures, Pope Martin I ranks 327 out of 2,238. Before him are Pope Zachary, Pope Stephen IV, Pope Adrian V, Pope Callixtus I, Pope Leo IV, and Ubba. After him are Sabbatai Zevi, Pope Nicholas IV, Pope Damasus II, Ephrem the Syrian, James, son of Alphaeus, and Barabbas.