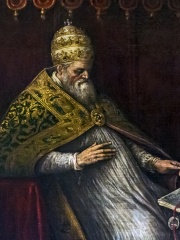 Pope Honorius III (c. 1150 – 18 March 1227), born Cencio Savelli, was head of the Catholic Church and ruler of the Papal States from 18 July 1216 to his death. A canon at the Basilica di Santa Maria Maggiore, he came to hold a number of important administrative positions, including that of Camerlengo. In 1197, he became tutor to the young Frederick II. As pope, he worked to promote the Fifth Crusade, which had been planned under his predecessor, Innocent III. Read more on Wikipedia

Pope Honorius III was most famous for his role in the Fourth Crusade, which resulted in the sack of Constantinople.

Among people born in 1148, Pope Honorius III ranks 1. After him are Béla III of Hungary and Qiu Chuji. Among people deceased in 1227, Pope Honorius III ranks 3. Before him are Genghis Khan and Jochi. After him are Qiu Chuji, Louis IV, Landgrave of Thuringia, Leszek the White, Henry V, Count Palatine of the Rhine, Abdallah al-Adil, Al-Mu'azzam Isa, Marco I Sanudo, Demetrius of Montferrat, and Renaud I, Count of Dammartin.