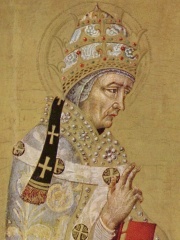 Pope Fabian (Latin: Fabianus) was the bishop of Rome from 10 January 236 to his death on 20 January 250, succeeding Anterus. A dove is said to have descended on his head to mark him as the Holy Spirit's unexpected choice to become the next pope. Read more on Wikipedia

Pope Fabian is most famous for being the pope who replaced Pope Sixtus II after he was martyred in 258. He is also famous for his work in trying to settle the dispute between the Roman and the Alexandrian churches over the date of Easter.

Among religious figures, Pope Fabian ranks 217 out of 2,272. Before him are Abdullah ibn Abd al-Muttalib, Tomás de Torquemada, Caiaphas, Irenaeus, Rabia of Basra, and Pope Innocent VII. After him are Pope Urban I, Pope Benedict IX, Pope Adrian I, Pope Siricius, Longinus, and Pope Sixtus I.

Among people born in 200, Pope Fabian ranks 3. Before him are Valerian and Pope Lucius I. After him are Cyprian, Pope Dionysius, Saint Cecilia, Pope Cornelius, Pope Pontian, Hua Tuo, Pope Stephen I, Celsus, and Athenaeus. Among people deceased in 250, Pope Fabian ranks 2. Before him is Nagarjuna. After him are Denis, Tryphon, Respicius, and Nympha, Herodian, Philostratus, Cai Yan, Aryadeva, Saint Mercurius, Censorinus, and Licinianus.