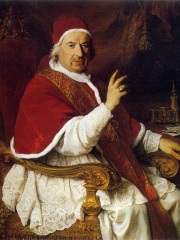 Pope Benedict XIV (Latin: Benedictus XIV; Italian: Benedetto XIV; 31 March 1675 – 3 May 1758), born Prospero Lorenzo Lambertini, was head of the Catholic Church and ruler of the Papal States from 17 August 1740 to his death in 1758.Perhaps one of the best scholars to sit on the papal throne, yet often overlooked, he promoted scientific learning, the Baroque arts, reinvigoration of Thomism, and the study of the human form. Firmly committed to carrying out the decrees of the Council of Trent and authentic Catholic teaching, Benedict removed changes previously made to the Breviary, sought peacefully to reverse growing secularism in European courts, invigorated ceremonies with great pomp, and throughout his life and his reign published numerous theological and ecclesiastical treatises. In governing the Papal States, he reduced taxation on some products, but also raised taxes on others; he also encouraged agriculture and supported free trade within the Papal States. Read more on Wikipedia

Pope Benedict XIV was most famous for his efforts to reform the Catholic Church in the 18th century.