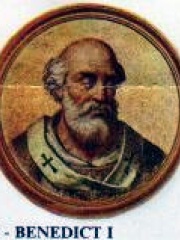 Pope Benedict I (Latin: Benedictus I; died 30 July 579) was the bishop of Rome from 2 June 575 to his death.Benedict was the son of a man named Boniface, and was called Bonosus by the Greeks. The ravages of the Lombards rendered it very difficult to communicate with the emperor at Constantinople, who claimed the privilege of confirming the election of popes. Hence there was a vacancy of nearly eleven months between the death of Pope John III and the arrival of the imperial confirmation of Benedict's election on 2 June 575.Benedict granted an estate, the Massa Veneris, in the territory of Minturnae, to Abbot Stephen of St. Read more on Wikipedia

Pope Benedict I is most famous for being the first pope to resign from the papacy in 600 years.

Page views of Pope Benedict IS by language

Among religious figures, Pope Benedict I ranks 336 out of 2,238. Before him are Pope Damasus II, Ephrem the Syrian, James, son of Alphaeus, Barabbas, Philip Neri, and Pope Eugene I. After him are Pope Eutychian, Pope Adeodatus II, Simeon Stylites, Pope Innocent V, Dionysius the Areopagite, and Pope Clement III.