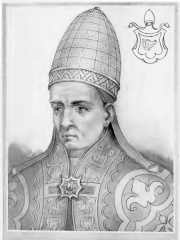 Pope Alexander II (1010/1015 – 21 April 1073), born Anselm of Baggio, was the head of the Roman Catholic Church and ruler of the Papal States from 1061 to his death in 1073. Born in Milan, Anselm was deeply involved in the Pataria reform movement. Elected according to the terms of his predecessor's bull, In nomine Domini, Anselm's was the first election by the cardinals without the participation of the people and minor clergy of Rome. Read more on Wikipedia

Pope Alexander II is most famous for his efforts to end the schism in the Catholic Church.

Among people born in 1010, Pope Alexander II ranks 3. Before him are Robert I, Duke of Normandy and Emperor Renzong of Song. After him are Andrew I of Hungary, Michael IV the Paphlagonian, Robert de Craon, Antipope Honorius II, Antipope Victor IV, Gallus Anonymus, Benno, William Iron Arm, and Drogo of Hauteville. Among people deceased in 1073, Pope Alexander II ranks 1. After him are Zhou Dunyi, Emperor Go-Sanjō, John Gualbert, Anthony of Kiev, and Estrid Svendsdatter.