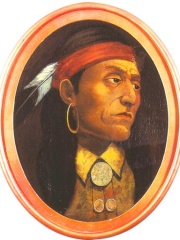 Pontiac or Obwaandi'eyaag (c. 1714/20 – April 20, 1769) was an Odawa war chief known for his role in the war named for him, from 1763 to 1766 leading Native Americans in an armed struggle against the British in the Great Lakes region due to, among other reasons, dissatisfaction with British policies. It followed the British victory in the French and Indian War, the American front of the Seven Years' War. Read more on Wikipedia

Pontiac is most famous for its Pontiac GTO, which was a muscle car that was built from 1964 to 1974.

Page views of Pontiacs by language

Among politicians, Pontiac ranks 5,532 out of 15,577. Before him are Margaret of Brabant, Pavel Axelrod, Christian III, Count Palatine of Zweibrücken, Ptolemy of Aloros, Ar-Radi, and Hans-Adam I, Prince of Liechtenstein. After him are Ali Hassan Salameh, Charles Emmanuel, Prince of Carignano, Erich Naumann, Emperor Houshao of Han, László Csatáry, and Richard of Conisburgh, 3rd Earl of Cambridge.

Among people born in 1714, Pontiac ranks 10. Before him are Étienne Bonnot de Condillac, Joseph I of Portugal, Claude Joseph Vernet, Niccolò Jommelli, Nikolaus I, Prince Esterházy, and Alaungpaya. After him are Duke Anthony Ulrich of Brunswick, Jean-Baptiste Pigalle, Kristijonas Donelaitis, George Whitefield, Princess Anne Charlotte of Lorraine, and Princess Friederike Luise of Prussia. Among people deceased in 1769, Pontiac ranks 2. Before him is Pope Clement XIII. After him are Hakuin Ekaku, Christian Fürchtegott Gellert, Vasily Trediakovsky, and Giambattista Lolli.