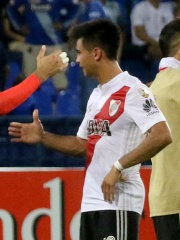 Gonzalo Nicolás "Pity" Martínez (born 13 June 1993) is an Argentine footballer who plays as an attacking midfielder for Saudi Professional League side Al-Nassr. Read more on Wikipedia

Since 2007, the English Wikipedia page of Pity Martínez has received more than 316,284 page views. Her biography is available in 16 different languages on Wikipedia. Pity Martínez is the 8,499th most popular soccer player.