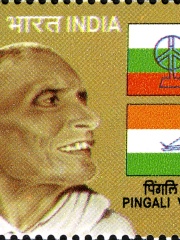 Pingali Venkayya (2 August 1876 – 4 July 1963) was an Indian freedom fighter and the designer of the flag on which the Indian national flag was based. He was born at Venkatagiri, Machilipatnam, in what is now the Indian state of Andhra Pradesh.Various so-called national flags had been used by members of the Indian independence movement prior to independence being achieved in 1947. Venkayya's version was first designed for the Indian National Congress and subsequently modified in 1947.According to The Hindu, "Pingali Venkayya was an authority in geology, agriculture and also an educationist who set up an educational institution in Machilipatnam." A postage stamp was issued to commemorate him in 2009 and in 2011 it was proposed that he be posthumously awarded the Bharat Ratna. Read more on Wikipedia

Since 2007, the English Wikipedia page of Pingali Venkayya has received more than 634,264 page views. His biography is available in 15 different languages on Wikipedia making him the 1,642nd most popular religious figure.

Among religious figures, Pingali Venkayya ranks 1,642 out of 2,001. Before him are Cædmon, Hilarion Capucci, Antipope Paschal III, Toribio Ticona Porco, Aidan of Lindisfarne, and Maximus V of Constantinople. After him are Christian Tumi, Megabates, Karl-Josef Rauber, Gennadius of Constantinople, Roger Deakins, and Alvin Sargent.