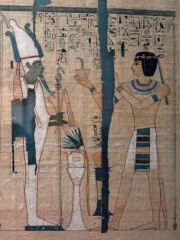 Pinedjem II was a High Priest of Amun at Thebes in Ancient Egypt from 990 BC to 969 BC and was the de facto ruler of the south of the country. He was married to his sister Isetemkheb D (both children of Menkheperre, the High Priest of Amun at Thebes, by Isetemkheb) and also to his niece Nesikhons, the daughter of his brother Smendes II. He succeeded Smendes II, who had a short rule. His children by Isetemkheb D were: Psusennes II Harweben, a Chantress of Amun; buried at Bab el-Gasus (?) Henuttawy, God's Wife of AmunBy Neskhons he had four children: two sons, Tjanefer and Masaharta, and two daughters, Itawy and Nesitanebetashru.When Pinedjem II died, his mummy, along with those of his wives and at least one daughter,Nesitanebetashru, were interred in tomb DB320 at Deir el-Bahri, above the Mortuary Temple of Hatshepsut. Read more on Wikipedia

Since 2007, the English Wikipedia page of Pinedjem II has received more than 28,386 page views. His biography is available in 18 different languages on Wikipedia making him the 8,504th most popular politician.

Among politicians, Pinedjem II ranks 8,469 out of 14,801. Before him are Dara Shukoh, Rusa III, Demetrius III Eucaerus, Béni Kállay, Manuel Zelaya, and Paolo Renier. After him are George II of Bulgaria, False Dmitry III, Kåre Willoch, Vakhtang II of Georgia, Leo IV, King of Armenia, and Gotarzes I.

Others Deceased in 969 BC