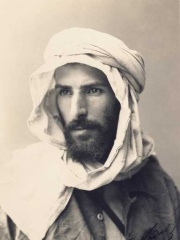 Pietro Paolo Savorgnan di Brazzà, later known as Pierre Paul François Camille Savorgnan de Brazza; 26 January 1852 – 14 September 1905), was an Italian-born, naturalized French explorer. With his family's financial help, he explored the Ogooué region of Central Africa, and later with the backing of the Société de Géographie de Paris, he reached far into the interior along the right bank of the Congo. He has often been depicted as a man of friendly manner, great charm and peaceful approach towards the Africans he met and worked with on his journeys, but recent research has revealed that he in fact alternated this kind of approach with more calculated deceit and at times relentless armed violence towards local populations. Read more on Wikipedia

Pierre Savorgnan de Brazza was a French explorer who was most famous for exploring the Congo River in Africa.