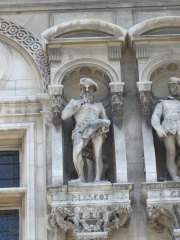 Pierre Lescot (c. 1515 – 10 September 1578) was a French architect active during the French Renaissance. His most notable works include the Fontaine des Innocents and the Lescot wing of the Louvre in Paris. Read more on Wikipedia

Pierre Lescot was a French architect who is most famous for designing the Louvre, which was built in 1546.

Among people born in 1515, Pierre Lescot ranks 9. Before him are Anne of Cleves, Philip Neri, Lucas Cranach the Younger, Injong of Joseon, Mary of Guise, and Piali Pasha. After him are Petrus Ramus, Felix of Cantalice, Sebastian Castellio, Cipriano de Rore, Johann Weyer, and Mikołaj "the Black" Radziwiłł. Among people deceased in 1578, Pierre Lescot ranks 8. Before him are John of Austria, Sebastian of Portugal, Catherine of Austria, Queen of Portugal, Uesugi Kenshin, James Hepburn, 4th Earl of Bothwell, and Piali Pasha. After him are Sebastiano Venier, Joanna of Austria, Grand Duchess of Tuscany, Pietro Andrea Mattioli, Ferdinand, Prince of Asturias, Giulio Clovio, and Giovanni Battista Moroni.