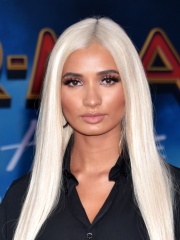 Pia Mia Perez (born September 19, 1996) is a Guamanian singer, songwriter, and model. She began her career by posting videos of herself singing on the video sharing site YouTube, and went on to star in commercials and music videos. Pia Mia signed a recording contract with Interscope Records in 2013, subsequently releasing her debut extended play, The Gift, and a series of singles, including “Do It Again” and “Touch”. Read more on Wikipedia

Since 2007, the English Wikipedia page of Pia Mia has received more than 2,874,901 page views. Her biography is available in 16 different languages on Wikipedia making her the 8,177th most popular actor.