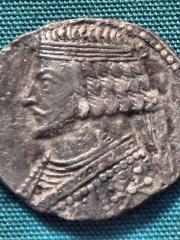 Phraates IV (also spelled Frahad IV; Parthian: 𐭐𐭓𐭇𐭕 Frahāt), was King of Kings of the Parthian Empire from 37 to 2 BC. He was the son and successor of Orodes II (r. 57–37 BC), and was given the throne after the death of his brother Pacorus I. Phraates IV soon murdered all his brothers, and also possibly his father. His actions alienated the Armenians and also some of his nobles, including the distinguished Monaeses, who fled to the Roman triumvir Mark Antony, but shortly returned and reconciled with Phraates IV. Phraates IV was attacked in 36 BC by Mark Antony, who marched through Armenia into Media Atropatene, and was defeated and lost the greater part of his army. Read more on Wikipedia

Phraates IV is most famous for his vast military conquests. He was able to annex Armenia, Syria, and Mesopotamia.

Among politicians, Phraates IV ranks 3,663 out of 15,710. Before him are Simeon of Moscow, Hsekiu, Huo Qubing, Princess Anna Sophie of Denmark, Jules Ferry, and Domitia Lepida the Younger. After him are Al-Mu'izz li-Din Allah, Muhammad al-Nasir, Fouad Mebazaa, Bayinnaung, Emperor Seimu, and Sajida Talfah.

Others Deceased in 2 BC