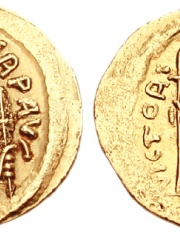 Phocas (Latin: Focas; Greek: Φωκάς, translit. Phokas; 547 – 5 October 610) was Eastern Roman emperor from 602 to 610. Initially a middle-ranking officer in the Eastern Roman army, Phocas rose to prominence as a spokesman of dissatisfied soldiers in their disputes with the court of the Emperor Maurice. Read more on Wikipedia

Since 2007, the English Wikipedia page of Phocas has received more than 564,674 page views. His biography is available in 54 different languages on Wikipedia (up from 52 in 2019). Phocas is the 988th most popular politician (down from 741st in 2019), the 11th most popular biography from Bulgaria and the 7th most popular Politician.

Phocas was most famous for being the emperor of the Byzantine Empire from 602 to 610. He was a usurper who overthrew Maurice and was killed by Heraclius.

Page views of Phocas by language

Among politicians, Phocas ranks 988 out of 15,577. Before him are Samuel of Bulgaria, Baldwin I of Jerusalem, Mohammed Daoud Khan, Bolesław I the Brave, Ulrika Eleonora, Queen of Sweden, and Zoë Porphyrogenita. After him are 5th Dalai Lama, Muhammad II of Khwarazm, Clement Attlee, George II of Greece, Josep Borrell, and Alauddin Khalji.