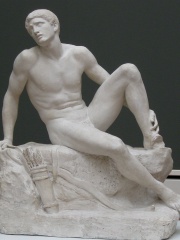 Philoctetes (Ancient Greek: Φιλοκτήτης Philoktētēs; English pronunciation: , stressed on the third syllable, -tet-), or Philocthetes, according to Greek mythology, was the son of Poeas, king of Meliboea in Thessaly, and Demonassa or Methone. He was a Greek hero, famed as an archer, and a participant in the Trojan War. Philoctetes was the subject of four different plays of ancient Greece, each written by one of the three major Greek tragedians. Read more on Wikipedia

In the Trojan War, Philoctetes was a great archer and a hero of the Greek forces. When he was bitten by a snake on the island of Lemnos, his wound was so bad that the Greeks sent him back to the island to die.

Page views of Philoctetes by language

Among politicians, Philoctetes ranks 1,373 out of 15,710. Before him are William McKinley, Ernst Thälmann, Ladislaus IV of Hungary, Zbigniew Brzezinski, Algirdas, and Warren G. Harding. After him are Olaf II of Denmark, Teti, Al-Mu'tasim, Ludwig I of Bavaria, Henry I, Duke of Guise, and Abijah of Judah.