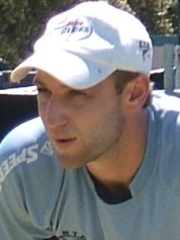 Phillip Joel Hughes (30 November 1988 – 27 November 2014) was an Australian Test and One Day International (ODI) cricketer who played domestic cricket for South Australia and Worcestershire. He was a left-handed opening batsman who played for two seasons with New South Wales before making his Test debut in 2009 at the age of 20. He made his One Day International Debut in 2013.Hughes scored his first Test century in March 2009, aged 20, in his second Test match for Australia, opening the batting and hitting 115 in the first innings against South Africa in Durban. Read more on Wikipedia

Since 2007, the English Wikipedia page of Phillip Hughes has received more than 1,992,681 page views. His biography is available in 26 different languages on Wikipedia making him the 33rd most popular cricketer.

Among cricketers, Phillip Hughes ranks 41 out of 35. Before him are Lasith Malinga, Jacques Kallis, Brett Lee, David Warner, Ravichandran Ashwin, and Steve Smith. After him are Michael Clarke, Mohammad Nabi, and Glenn Maxwell.

Among CRICKETERS In Australia