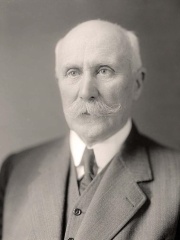 Henri Philippe Benoni Omer Pétain (24 April 1856 – 23 July 1951), generally known as Philippe Pétain (, French: [filip petɛ̃]), Marshal Pétain (Maréchal Pétain) and sometimes, The Old Marshal (Le Vieux Maréchal), was a French general officer who attained the position of Marshal of France at the end of World War I, during which he became known as The Lion of Verdun (Le Lion de Verdun). In collaboration with Nazi Germany, he then served as the Chief of State of Vichy France from 1940 to 1944. Read more on Wikipedia

Since 2007, the English Wikipedia page of Philippe Pétain has received more than 2,755,361 page views. His biography is available in 71 different languages on Wikipedia making him the 267th most popular politician.

Among politicians, Philippe Pétain ranks 264 out of 14,801. Before him are Julian, Woodrow Wilson, Nicholas I of Russia, Charles VIII of France, Leopold II, Holy Roman Emperor, and Georgy Zhukov. After him are Godfrey of Bouillon, Hugh Capet, Ahmed II, Ashurbanipal, Alexander II of Russia, and Konstantin Chernenko.