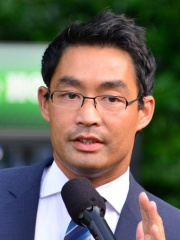 Philipp Rösler, (born 24 February 1973) is a German medical doctor and former politician who served as Federal Minister of Economics and Technology and Vice Chancellor of Germany from 2011 to 2013.Rösler was also Chairman of the liberal Free Democratic Party (FDP) from 2011 to 2013. Following the 2013 federal election in which the FDP left the Bundestag, he announced his resignation from the chairmanship. Born in Vietnam, Rösler was the first cabinet minister of Asian background in Germany. Read more on Wikipedia

Since 2007, the English Wikipedia page of Philipp Rösler has received more than 197,203 page views. His biography is available in 32 different languages on Wikipedia making him the 12,548th most popular politician.