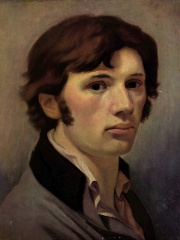 Philipp Otto Runge (German: [ˈʁʊŋə]; 1777–1810) was a German artist, a draftsman, painter, and color theorist. Runge and Caspar David Friedrich are often regarded as the leading painters of the German Romantic movement.: 51 p. : 443 pp.  He is frequently compared with William Blake by art historians, although Runge's short ten year career is not easy to equate to Blake's career.: 38 pp. : 343 pp.  By all accounts he had a brilliant mind and was well versed in the literature and philosophy of his time. He was a prolific letter writer and maintained correspondences and friendships with contemporaries such as Carl Ludwig Heinrich Berger, Caspar David Friedrich, Johann Wolfgang von Goethe, Friedrich Wilhelm Joseph Schelling, Henrik Steffens, and Ludwig Tieck. Read more on Wikipedia

Philipp Otto Runge is most famous for his essay, "The Theory of Colors," which was published in 1810. The essay was one of the first to propose that color is not an objective property of objects, but rather a subjective perception of the human eye.