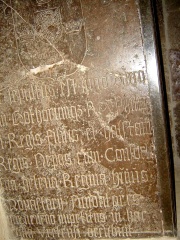 Philip or Filip (Swedish: Filip Halstensson) was King of Sweden from c. 1105–1110 until 1118.He was a son of King Halsten Stenkilsson and nephew of King Inge the Elder. Philip and his brother Inge the Younger ruled together from 1105 or 1110 and onwards as successors of their uncle King Inge the Elder. Read more on Wikipedia

Since 2007, the English Wikipedia page of Philip of Sweden has received more than 23,339 page views. His biography is available in 26 different languages on Wikipedia making him the 3,296th most popular politician.

Page views of Philip of Swedens by language

Among politicians, Philip of Sweden ranks 3,274 out of 14,801. Before him are Pier Luigi Farnese, Duke of Parma, Albert III, Duke of Saxony, Bettino Craxi, Thessalonike of Macedon, Duchess Sophie Charlotte in Bavaria, and Joseph Berchtold. After him are Louis, Count of Vermandois, Švitrigaila, Valdemar III of Denmark, Félix Houphouët-Boigny, Henri de Baillet-Latour, and Sigeric.