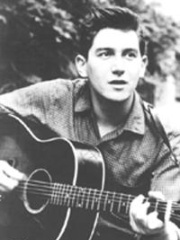 Philip David Ochs (; December 19, 1940 – April 9, 1976) was an American protest singer (or, as he preferred, a topical singer) and songwriter who was known for his sharp wit, sardonic humor, earnest humanism, political activism, insightful and alliterative lyrics, and distinctive voice. He wrote hundreds of songs in the 1960s and 1970s and released eight albums. Ochs performed at many political events during the 1960s counterculture era, including anti-Vietnam War and civil rights rallies, student events, and organized labor events over the course of his career, in addition to many concert appearances at such venues as New York City's Town Hall and Carnegie Hall. Read more on Wikipedia

Since 2007, the English Wikipedia page of Phil Ochs has received more than 987,905 page views. His biography is available in 21 different languages on Wikipedia making him the 247th most popular singer.