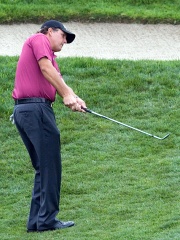 Philip Alfred Mickelson (born June 16, 1970), nicknamed Lefty, is an American professional golfer. He has won 44 events on the PGA Tour, including five major championships: three Masters titles (2004, 2006, 2010), a PGA Championship (2005), and an Open Championship (2013).Mickelson is one of 12 players in the history of golf to win three of the four majors. He has won every major except the U.S. Open, where he has finished runner-up a record six times.Mickelson has spent over 25 consecutive years in the top 50 of the Official World Golf Ranking. Read more on Wikipedia

Since 2007, the English Wikipedia page of Phil Mickelson has received more than 4,809,294 page views. His biography is available in 25 different languages on Wikipedia making him the 9th most popular golfer.