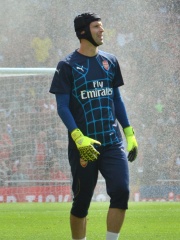 Petr Čech (Czech pronunciation: [ˈpɛtr̩ ˈtʃɛx] (listen); born 20 May 1982) is a Czech professional footballer who currently has a combined role of a player and a technical/performance advisor for English club Chelsea. He also played semi-professional ice hockey as a goaltender for Guildford Phoenix. Described by numerous players, pundits and managers as one of the greatest goalkeepers in European history, he is argued, alongside Peter Schmeichel, to be the greatest goalkeeper in Premier League history.Čech began his senior career at Chmel Blšany in 1999, where he played sporadically for two seasons prior to relocating to Sparta Prague in 2001. Read more on Wikipedia

Since 2007, the English Wikipedia page of Petr Čech has received more than 4,074,794 page views. His biography is available in 65 different languages on Wikipedia making him the 206th most popular soccer player.

Among people born in 1982, Petr Čech ranks 5. Before him are Catherine, Duchess of Cambridge, Kaká, Anne Hathaway, and Prince William, Duke of Cambridge. After him are Lil Wayne, Eddie Redmayne, Kirsten Dunst, Víctor Valdés, Adriano, Jessica Biel, and Priyanka Chopra.