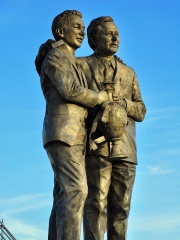 Peter Thomas Taylor (2 July 1928 – 4 October 1990) was an English football player and manager. A goalkeeper with a modest playing career, he went on to work in management alongside Brian Clough at Derby County and Nottingham Forest, winning the Football League with both clubs and the European Cup twice with Nottingham Forest. He joined Coventry City in 1945 and spent the 1953–54 season as Coventry's first choice goalkeeper, but was otherwise mostly used a reserve player. Read more on Wikipedia

Since 2007, the English Wikipedia page of Peter Taylor has received more than 26,958 page views. His biography is available in 18 different languages on Wikipedia making him the 2,381st most popular soccer player.