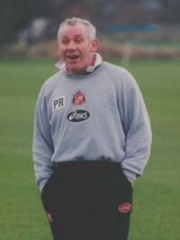 Peter Reid (born 20 June 1956) is an English football manager, pundit and retired player.A defensive midfielder in his playing days, Reid enjoyed a long and successful career. He built his reputation as one of England's brightest midfield talents of the time at Bolton Wanderers, before signing for Everton in 1982. It was there that he enjoyed the most fruitful spell of his career, as he helped the club win domestic and European honours, including the Football League twice. Read more on Wikipedia

Since 2007, the English Wikipedia page of Peter Reid has received more than 503,050 page views. His biography is available in 23 different languages on Wikipedia making him the 4,823rd most popular soccer player.