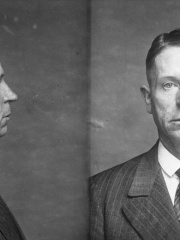 Peter Kürten (German: [ˈpeːtɐ ˈkyːʁtən]; 26 May 1883 – 2 July 1931) was a German serial killer known as both The Vampire of Düsseldorf and the Düsseldorf Monster, who committed a series of murders and sexual assaults between February and November 1929 in the city of Düsseldorf. In the years before these assaults and murders, Kürten had amassed a lengthy criminal record for offenses including arson and attempted murder. He also confessed to the 1913 murders of a nine-year-old girl in Mülheim am Rhein and a 17-year-old girl in Düsseldorf.Described by Karl Berg as "the king of the sexual perverts," Kürten was found guilty of nine counts of murder and seven counts of attempted murder for which he was sentenced to death by beheading in April 1931. Read more on Wikipedia

Since 2007, the English Wikipedia page of Peter Kürten has received more than 1,347,190 page views. His biography is available in 21 different languages on Wikipedia making him the 27th most popular extremist.

Most Popular EXTREMISTS in Wikipedia