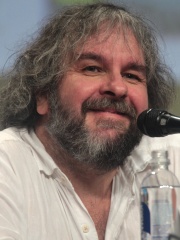 Sir Peter Robert Jackson (born 31 October 1961) is a New Zealand film director, screenwriter and producer. He is best known as the director, writer and producer of the Lord of the Rings trilogy (2001–2003) and the Hobbit trilogy (2012–2014), both of which are adapted from the novels of the same name by J. R. R. Tolkien. Other notable films include the critically lauded drama Heavenly Creatures (1994), the horror comedy The Frighteners (1996), the epic monster remake film King Kong (2005), the World War I documentary film They Shall Not Grow Old (2018) and the documentary The Beatles: Get Back (2021). Read more on Wikipedia

Peter Jackson is most famous for his work as a film director, producer, and screenwriter. He is best known for directing the Lord of the Rings trilogy and the Hobbit trilogy.

Among FILM DIRECTORS In New Zealand