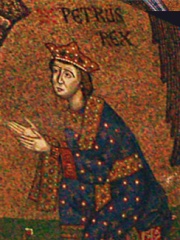 Peter II (1304 – 8 August 1342) was the King of Sicily from 1337 until his death, although he was associated with his father as co-ruler from 1321. Peter's father was Frederick III of Sicily and his mother was Eleanor, a daughter of Charles II of Naples. His reign was marked by strife between the throne and the nobility, especially the old families of Ventimiglia, Palizzi and Chiaramonte, and by war between Sicily and Naples.Contemporaries regarded Peter as feeble-minded. Read more on Wikipedia

Page views of Peter II of Sicilies by language

Among politicians, Peter II of Sicily ranks 4,621 out of 15,577. Before him are Nicholas J. Spykman, Janet Yellen, Kersti Kaljulaid, Louis I, Count of Flanders, Khabul Khan, and Franz Ritter von Epp. After him are Sahib I Giray, Takelot II, Abu Yaqub Yusuf, Bořivoj I, Duke of Bohemia, Karl I, Prince of Liechtenstein, and Gaius Calpurnius Piso.