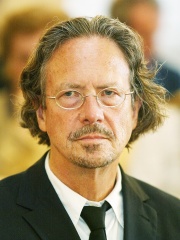 Peter Handke (German pronunciation: [ˈpeːtɐ ˈhantkə]; born 6 December 1942) is an Austrian novelist, playwright, translator, poet, film director, and screenwriter. He was awarded the Nobel Prize in Literature in 2019 "for an influential work that with linguistic ingenuity has explored the periphery and the specificity of human experience." Handke is considered to be one of the most influential and original German-language writers in the second half of the 20th century.In the late 1960s, he earned his reputation as a member of the avant-garde with such plays as Offending the Audience (1966) in which actors analyze the nature of theatre and alternately insult the audience and praise its "performance", and Kaspar (1967). His novels, mostly ultraobjective, deadpan accounts of characters in extreme states of mind, include The Goalie's Anxiety at the Penalty Kick (1970) and The Left-Handed Woman (1976). Read more on Wikipedia

Peter Handke is most famous for his novel "The Goalie's Anxiety at the Penalty Kick."

Among writers, Peter Handke ranks 187 out of 5,794. Before him are Ahmad ibn Hanbal, John the Evangelist, Diogenes Laërtius, Khalil Gibran, Georges Simenon, and Mansur Al-Hallaj. After him are Stéphane Mallarmé, Yukio Mishima, Nizami Ganjavi, Tristan Tzara, Lucian, and Sigrid Undset.