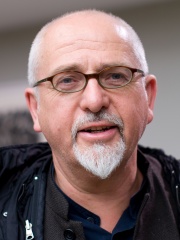 Peter Brian Gabriel (born 13 February 1950) is an English musician, singer, songwriter, record producer and activist. He rose to fame as the original lead singer of the progressive rock band Genesis. After leaving Genesis in 1975, he launched a successful solo career with "Solsbury Hill" as his first single. His 1986 album, So, is his best-selling release and is certified triple platinum in the UK and five times platinum in the U.S. Read more on Wikipedia

Peter Gabriel is most famous for being a singer-songwriter and musician. He is best known for his work with Genesis, but has also had a successful solo career.