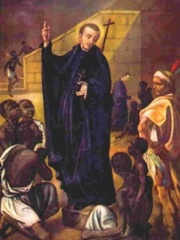 Peter Claver, (Spanish: Pedro Claver y Corberó, Catalan: Pere Claver i Corberó) (26 June 1580 – 8 September 1654) was a Spanish Jesuit priest and missionary born in Verdú (Catalonia, Spain) who, due to his life and work, became the patron saint of slaves, the Republic of Colombia, and ministry to African Americans. During the 40 years of his ministry in the New Kingdom of Granada, it is estimated he personally baptized around 300,000 people (in groups of 10) and heard the confessions of over 5,000 slaves per year. He is also patron saint for seafarers. Read more on Wikipedia

Among religious figures, Peter Claver ranks 995 out of 2,272. Before him are Fausto Sozzini, Ilia II of Georgia, John the Merciful, Arnold Janssen, Paul Marcinkus, and Leopold Mandić. After him are Nicholas Mystikos, Ikkyū, John Fisher, Eusebius of Vercelli, Gerolamo Emiliani, and Nicholas Kabasilas.