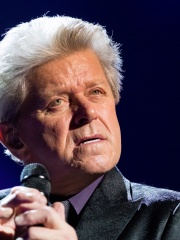 Peter Paul Cetera ( sə-TERR-ə; born September 13, 1944) is an American retired singer, songwriter, and bassist best known for being an original member of the rock band Chicago (1967–1985), before launching a successful solo career. His career as a recording artist encompasses 17 albums with Chicago and eight solo albums.With "If You Leave Me Now", a song written and sung by Cetera on the group's tenth album, Chicago garnered its first Grammy Award. It was also the group's first number one single.As a solo artist, Cetera has scored six Top 40 singles, including two that reached number one on Billboard's Hot 100 chart in 1986, "Glory of Love" and "The Next Time I Fall." "Glory of Love", the theme song from the film The Karate Kid Part II (1986), was co-written by Cetera, David Foster, and Diane Nini, and was nominated for both an Academy Award and a Golden Globe Award for best original song from a motion picture. Read more on Wikipedia