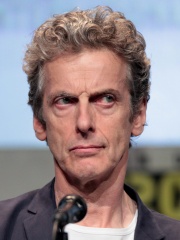 Peter Dougan Capaldi (; born 14 April 1958) is a Scottish actor, director, writer and musician. He portrayed the twelfth incarnation of the Doctor in Doctor Who (2013–2017) and Malcolm Tucker in The Thick of It (2005–2012), for which he received four British Academy Television Award nominations, winning Best Male Comedy Performance in 2010. Read more on Wikipedia

Among actors, Peter Capaldi ranks 1,707 out of 10,030. Before him are Karl Urban, Nell Gwyn, Mickey Hargitay, Rachel Félix, Miranda Richardson, and Per Oscarsson. After him are Felicity Huffman, David Arquette, Sebastian Koch, Vince Vaughn, Brad Dexter, and Peter van Eyck.