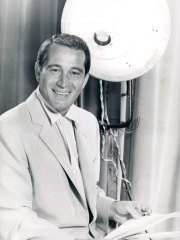 Pierino Ronald "Perry" Como (; May 18, 1912 – May 12, 2001) was an American singer, actor and television personality. During a career spanning more than half a century, he recorded exclusively for RCA Victor for 44 years, after signing with the label in 1943.He recorded primarily vocal pop and was renowned for recordings in the intimate, easy-listening genre pioneered by multi-media star Bing Crosby."Mr. C.", as he was nicknamed, sold millions of records and pioneered a weekly musical variety television show. Read more on Wikipedia

Among singers, Perry Como ranks 335 out of 3,528. Before him are Christina Aguilera, Anggun, Joey Ramone, Linda Ronstadt, Eric Adams, and Seal. After him are Atahualpa Yupanqui, Alexander Vertinsky, Agnes Baltsa, Anne-Marie David, Warda Al-Jazairia, and Lill-Babs.