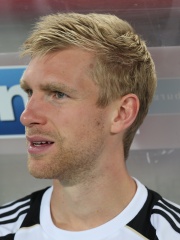 Per Mertesacker (German pronunciation: [ˈpeːɐ̯ ˈmɛɐ̯təsʔakɐ]; born 29 September 1984) is a German football coach and former professional player who played as a centre back. He is the current manager of the Arsenal Academy.Mertesacker began his senior career after being promoted from the youth ranks at Bundesliga club Hannover 96, making his senior league debut in November 2003. He was soon dubbed "the Defence Pole" ("die Abwehrlatte") by German tabloids, and gained a reputation for his exceptional disciplinary record, going 31 league games without being booked. Read more on Wikipedia

Page views of Per Mertesackers by language

Among soccer players, Per Mertesacker ranks 1,652 out of 16,923. Before him are Ashley Young, Christian Eriksen, Juan Mata, Gabriel Calderón, Lakhdar Belloumi, and Jakub Błaszczykowski. After him are Titus Buberník, Beb Bakhuys, Roberto Ferreiro, Włodzimierz Smolarek, Zlatko Zahovič, and Ján Pivarník.