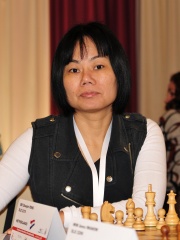 Peng Zhaoqin (Chinese: 彭肇勤; pinyin: Péng Zhàoqín; born 8 May 1968 in Guangzhou, Guangdong) is a Chinese-born Dutch chess player, who has the FIDE title of Grandmaster, which was awarded in October 2004. She won three times the Chinese women's chess championship, in 1987, 1990 and 1993. She has resided in the Netherlands since 1996. Read more on Wikipedia

Since 2007, the English Wikipedia page of Peng Zhaoqin has received more than 12,409 page views. Her biography is available in 15 different languages on Wikipedia making her the 178th most popular chess player.