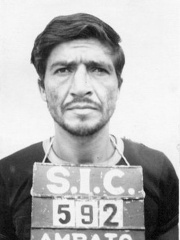 Pedro Alonso López (born 8 October 1948) is a Colombian serial killer, who was sentenced for killing 110 girls, but who claimed to have raped and killed more than 300 girls across Colombia, Peru and Ecuador. Aside from uncited local accounts, López's crimes first received international attention from an interview conducted by Ron Laytner, a longtime freelance photojournalist who reported interviewing López in his Ambato prison cell in 1980. Laytner's interviews were widely published, first in the Chicago Tribune on Sunday, 13 July 1980, then in the Toronto Sun and The Sacramento Bee on 21 July 1980, and over the years in many other North American papers and foreign publications, including the National Enquirer. Read more on Wikipedia

Since 2007, the English Wikipedia page of Pedro López has received more than 11,325 page views. His biography is available in 21 different languages on Wikipedia making him the 98th most popular extremist.

Among EXTREMISTS In Colombia

Among extremists born in Colombia, Pedro López ranks 1. After him are Luis Garavito (1957).