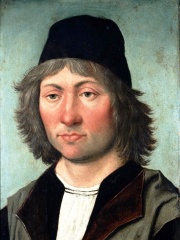 Pedro Berruguete (c. 1450 – 1504) was a Spanish painter whose art is regarded as a transitional style between gothic and Renaissance art. Berruguete most famously created paintings of the first few years of the Inquisition and of religious imagery for Castilian retablos. Read more on Wikipedia

Since 2007, the English Wikipedia page of Pedro Berruguete has received more than 83,714 page views. His biography is available in 17 different languages on Wikipedia. Pedro Berruguete is the 736th most popular painter.

Among people born in 1450, Pedro Berruguete ranks 25. Before him are Zagan Pasha, Francesco Francia, Juan de Flandes, Gaspar Corte-Real, Ibrahim Lodi, and John of Foix, Viscount of Narbonne. After him are Basarab II of Wallachia, Piero Soderini, Marin Barleti, Yunus Pasha, Ercole de' Roberti, and Sikandar Lodi. Among people deceased in 1504, Pedro Berruguete ranks 7. Before him are Isabella I of Castile, Stephen III of Moldavia, Filippino Lippi, Philibert II, Duke of Savoy, Frederick of Naples, and John Corvinus. After him are Alvise Vivarini, Eberhard II, Duke of Württemberg, Mauro Codussi, and Garci Rodríguez de Montalvo.