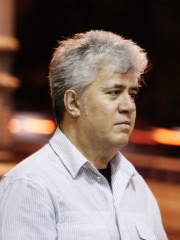 Pedro Almodóvar Caballero (Spanish pronunciation: [ˈpeðɾo almoˈðoβaɾ kaβaˈʝeɾo]; born 25 September 1949) is a Spanish filmmaker, director, screenwriter, producer, and former actor. He came to prominence as a director and screenwriter during La Movida Madrileña, a cultural renaissance that followed after the end of Francoist Spain. His first few films characterised the sense of sexual and political freedom of the period. Read more on Wikipedia

Since 2007, the English Wikipedia page of Pedro Almodóvar has received more than 2,138,204 page views. His biography is available in 69 different languages on Wikipedia making him the 23rd most popular film director.