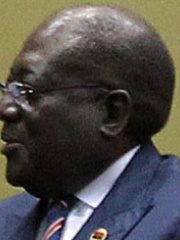 António Paulo Kassoma (born 6 June 1951) is an Angolan politician. He was named Prime Minister of Angola in September 2008 and remained in office until the new constitution replaced this function in February 2010. Kassoma then served as President of the National Assembly of Angola from 2010 to 2012. Read more on Wikipedia

Since 2007, the English Wikipedia page of Paulo Kassoma has received more than 22,392 page views. His biography is available in 18 different languages on Wikipedia making him the 12,905th most popular politician.