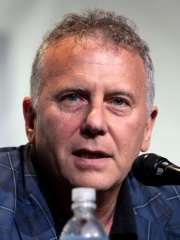 Paul Reiser (born March 30, 1956) is an American comedian, actor, writer, and musician. He is known for his roles as Michael Taylor in the 1980s sitcom My Two Dads, Paul Buchman in the NBC sitcom Mad About You, Modell in the 1982 film Diner, Carter Burke in the 1986 film Aliens, and more recently as Jim Neiman in the 2014 film Whiplash and Doug Getty in the Amazon Video series Red Oaks. Reiser is ranked 77th on Comedy Central's 2004 list of the "100 Greatest Stand-ups of All Time". Read more on Wikipedia

Since 2007, the English Wikipedia page of Paul Reiser has received more than 3,605,895 page views. His biography is available in 29 different languages on Wikipedia making him the 2,308th most popular actor.